Some people say that I have “too much time on my hands” but I’ve actually been quite busy for the past 2 weeks planning an Easter Egg hunt so I don’t see where I’ve had any spare time.

Working full time has this thing where you are given “annual leave”; basically, days off that don’t affect your pay, however there is a caveat which is that you must use all of your allocated annual leave by the end of the allocated year. I used to be freelance and so I never really got used to the idea of taking days off – days off meant no money and so if I didn’t need the day off, I’d quite happily work. What this means essentially is since I’ve been working full time, every year I’m left with a lot annual leave by the end of the allocated year that I’m forced to take without any reason to take it. And so this year, I decided to use my time to plan an Easter Egg hunt for the office. But why do something, if you’re not going to it properly. And thus starts the planning of an excessively elaborate Easter Egg hunt for no reason other than I was bored.

I wanted to do more than just hide eggs around the office and so I decided to incorporate a narrative – a reason to find the eggs. Then with this, I thought I’d give the Easter Bunny an alternative storyline this year, what if the Easter Bunny was the victim because there were other bunnies looking to take his place? This naturally created a villain for my story and suddenly I knew how it was all going to play out.

With most storylines, there is usually at least a protagonist, an antagonist and a reason for both of them to exist. So I put the “players” in the role of the protagonist to catch the antagonist – the evil bunnies. And this is where I started to have fun. In order to create the evil bunnies I needed to put myself into the mind of a supervillain which admittedly I have always wondered if I could ever be a Lex Luthor playing with everyone’s lives to take over the world. So in this case, I decided that in order for the players to catch the evil bunnies, they must solve a series of riddles that will lead them to their prize.

Branding is important. I wanted to ensure that everyone would immediately recognise the event and in order to do this, I had to create a simple brand that everyone would become familiar with beforehand. It was important for this brand to make everyone curious at first, not give anything away, but have them ask questions, grow an interest. Then when it all happens, they’ll know what to look for. 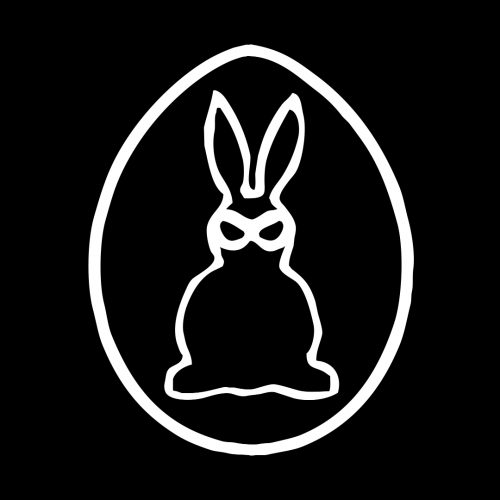 Whilst designing my logo, there were some obvious rules, it had to be simple, work in both black and white and it needed to make people think of Easter. In the interest of linking my brand with the narrative I thought creating a logo for the evil bunnies would work, like they were part of a crime syndicate leaving their mark behind. I therefore started looking at creating a logo with a bunny outline but didn’t want it to look anything like the Playboy logo. I created the bunny outline and put it in the egg shape but it was missing something, it wasn’t sinister enough, it wasn’t unique enough. I thought about adding a line through it, like a protest against the Easter Bunny but then tried the mask and it was perfectly subtle.

Once I had created my brand, I needed to plaster it everywhere so I included it in all e-mails and got stickers printed to stick around the office, on people’s laptops, on the printer and on windows and doors. People were seeing the logo everywhere and becoming more and more familiar with it whether they wanted to or not. 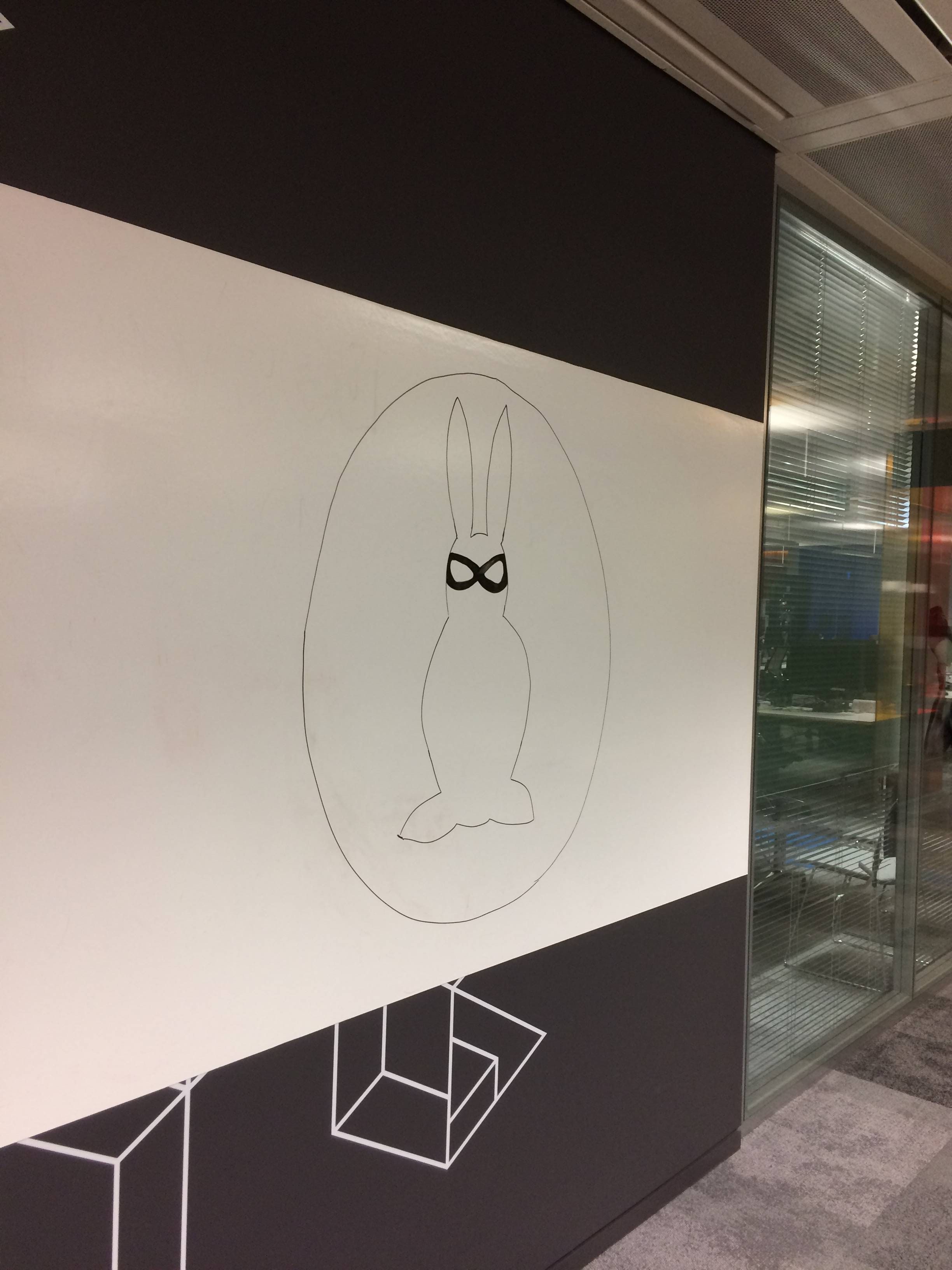 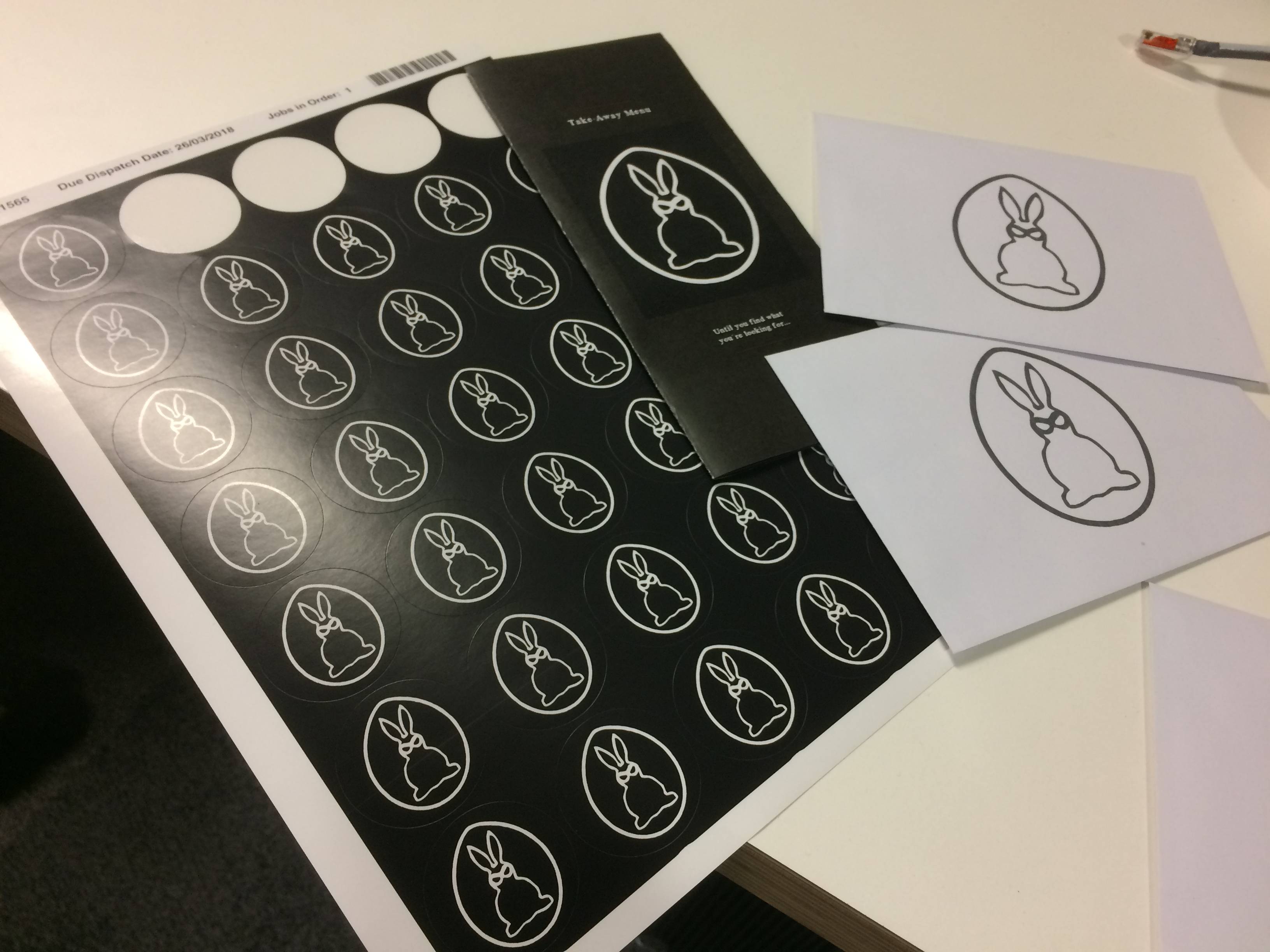 101 marketing: if you want to get people interested in your event, tease them. Make them feel uneasy, make them feel like they are not in control, that they really need to know what is going on for their own peace of mind. Most of my colleagues didn’t know what I was planning so this gives me the opportunity to create some mystery, some uncertainty and a reason for them to be interested. This was my favourite step. I wanted to introduce the narrative in parts, to create that excitement and ensure that everyone was keen on watching the next video. So I filmed a series of teasers (and bought a bunch of props that I’ll probably never use again) to be sent out on the days leading to the event.

The first showing as little as possible, just a glimpse, a hint, and mainly to introduce the logo and a date.

Then the second giving a slight clue to what is going on.

The third to reveal what the event is about.

And finally the 4th to be released on the day to kick start the event.

Step 4: Map out the hunt

Planning the hunt required a lot more time. Alongside the usual hiding of the eggs, the idea was to hide a series of riddles/clues around the office that will eventually lead to the 3 bunnies. However, I needed to ensure that the bunnies couldn’t be found without the clues; they needed to hidden in places that either no-one would ever look or they needed something in order to access them. So the first thing I needed to do was to decide where all the final hiding places would be, then all the hiding places of the clues, then write all the riddles pointing to each location. This took quite a while but by the end I was sure I’d be giving The Riddler a run for his money. And admittedly for a short period of time, I became slightly addicted to writing in rhyme.

For the first bunny I decided the final hiding place to be my locker – this was easy enough as the player would need to obtain the key first, then solve which locker the key unlocked. 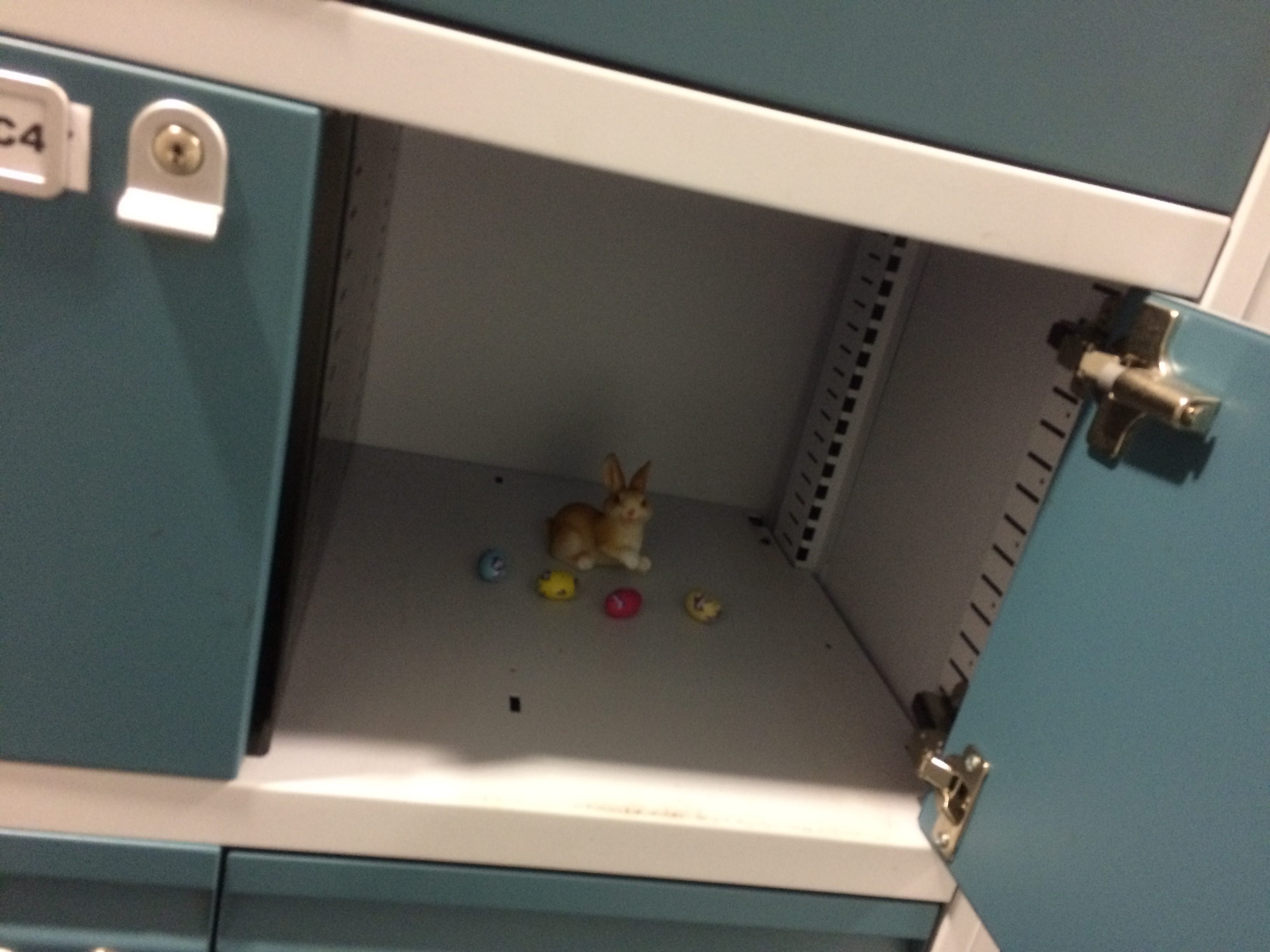 The next bunny was slightly harder. It was placed in the props cupboard inside a camel costume (yes, this was for a costume for a rather unique shoot a few years ago). In order to point to the camel’s head, I made a Chinese take-away menu with 75 items on the menu which the player needed to find. Once they found it, there was a vague clue explaining that they needed to pick the right item on the menu. Number 42 on the menu being “Camel’s head”. Then the next riddle they’d find would point to number 42. They’d need to put the 2 together to work out what they were looking for. 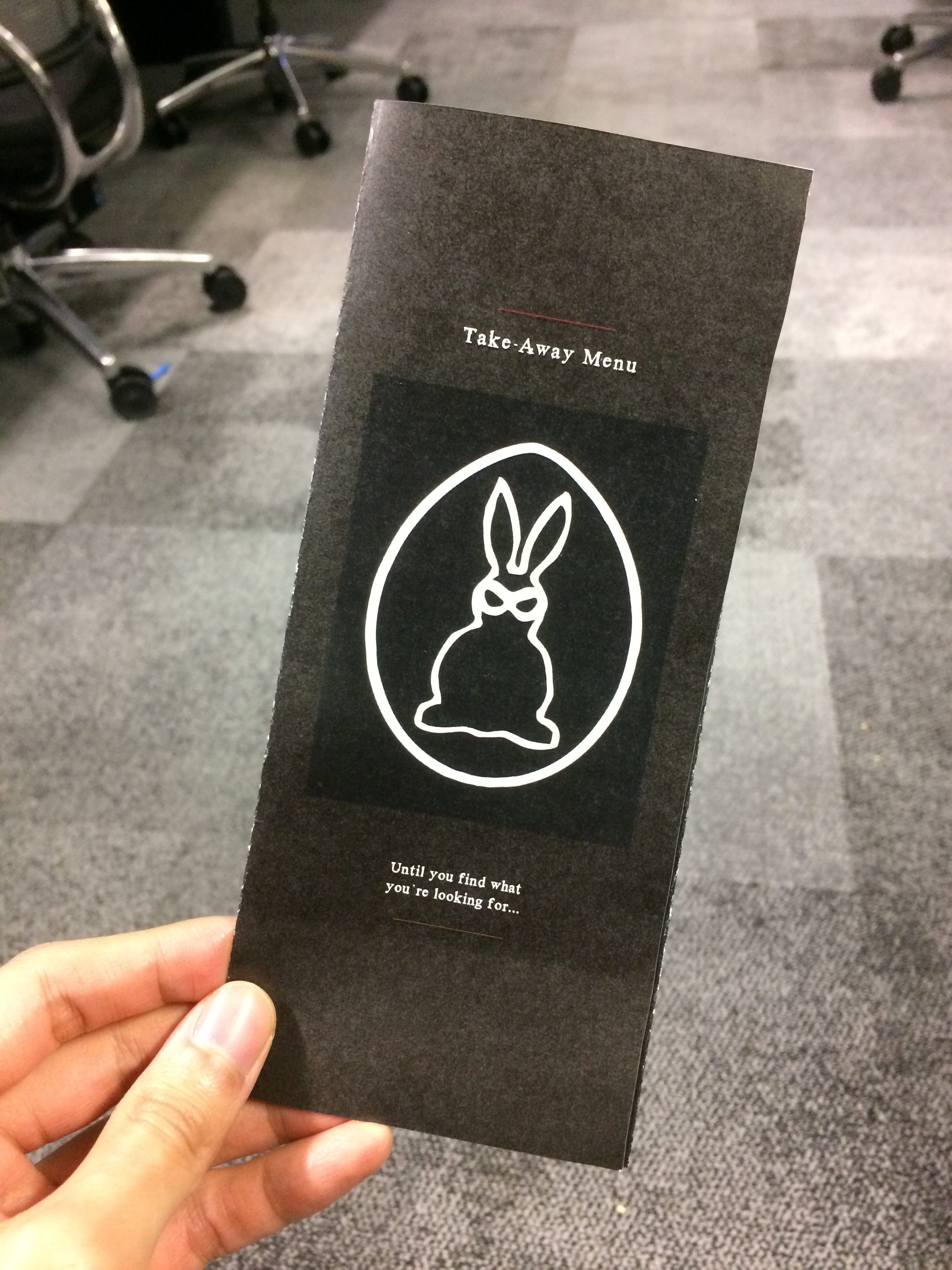 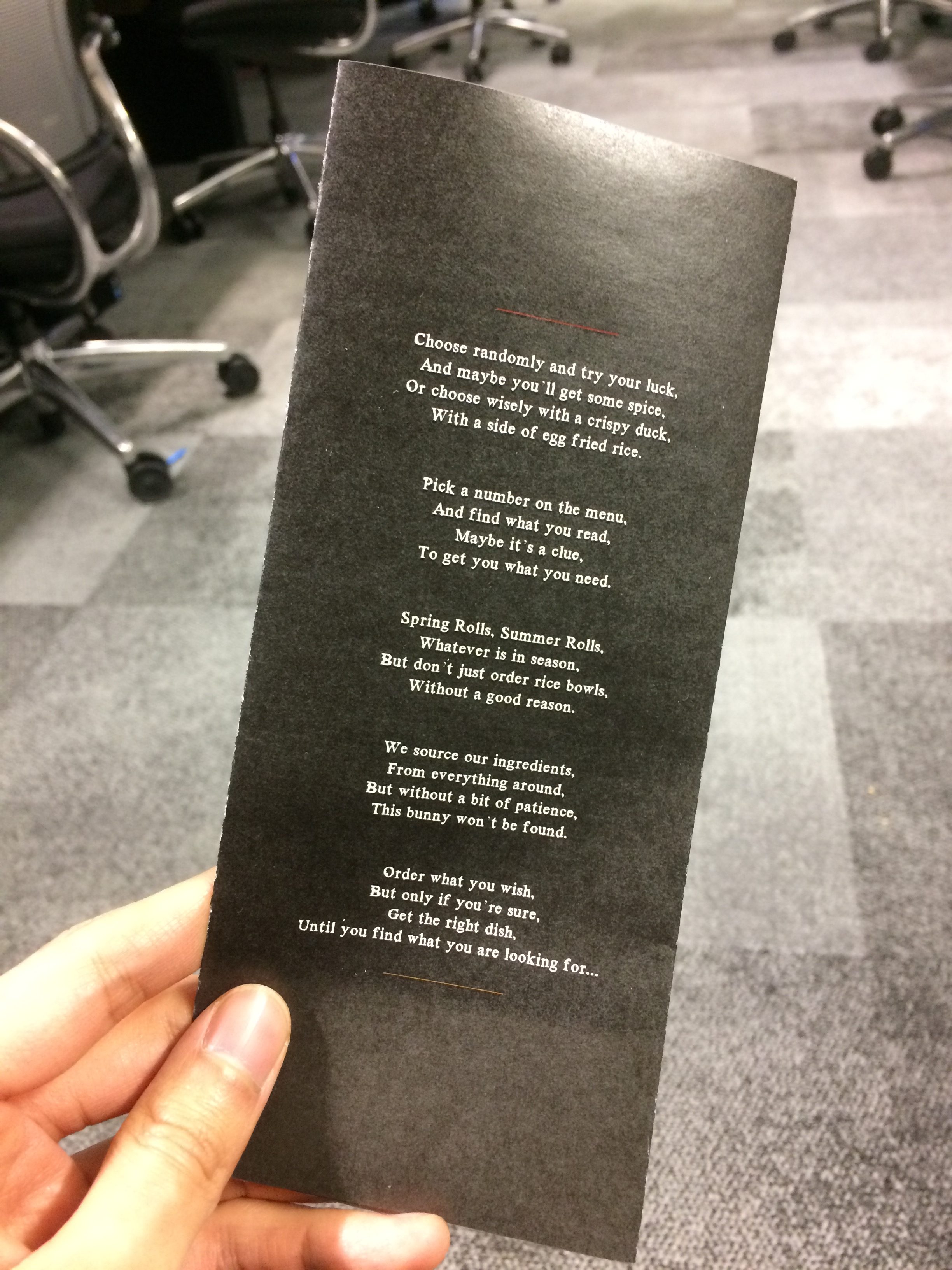 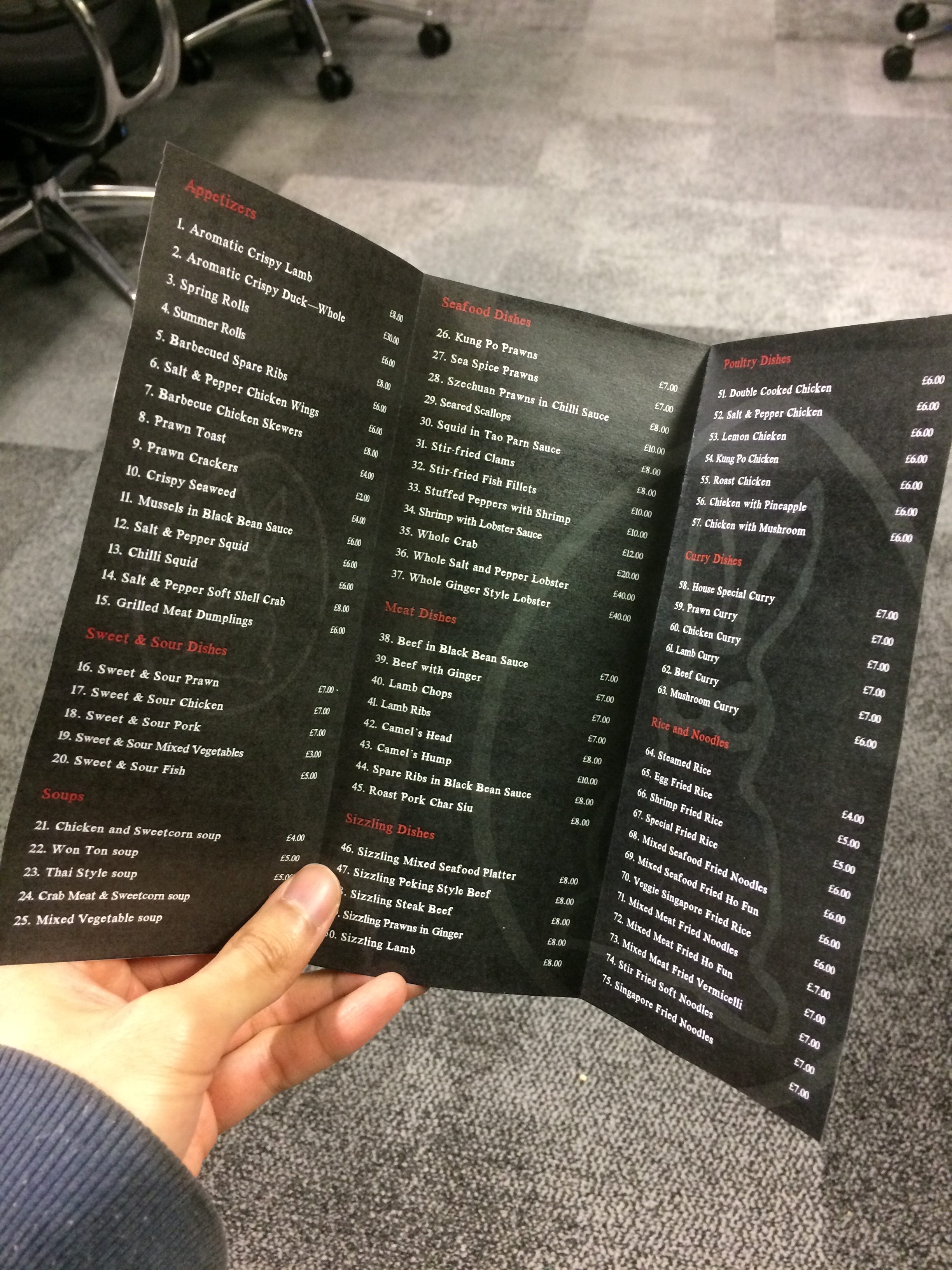 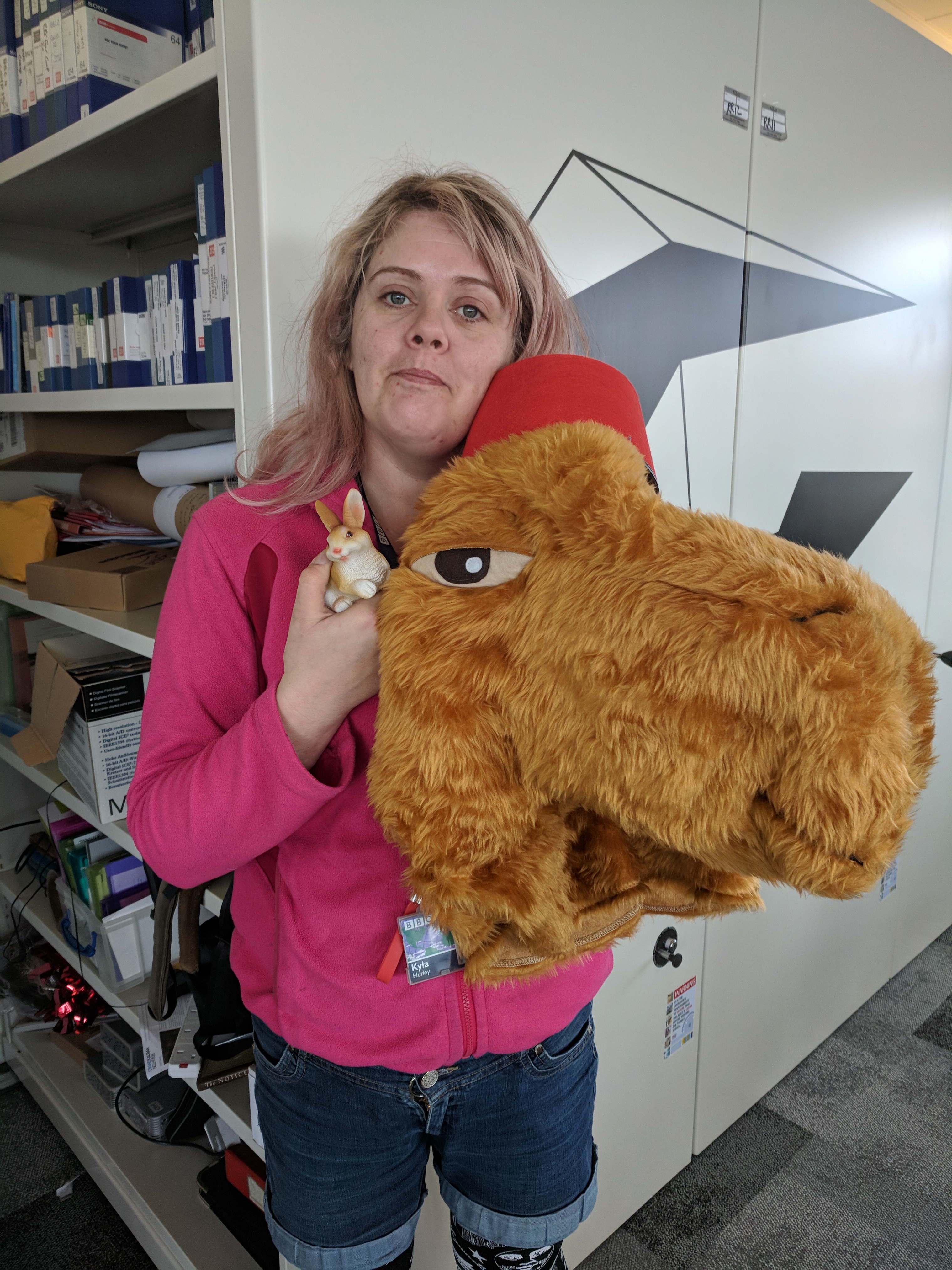 The third bunny was also another challenge; I wanted to make the player doubt themselves as at no point have I said that the hunt is restricted to the building and so I hid this bunny with the staff at Oliver Bonas, a shop a few doors down from the office. The staff very kindly agreed to play along to the hunt and so the player needed to find a wrapped pineapple as part of their hunt then trade the pineapple for the bunny at Oliver Bonas.

The night before the hunt, I waited until everyone had left the office then prepped all my props, added some more branding around the office then printed all the riddles – branded with my logo of course, in envelopes which also had the logo printed on then hid them in all the planned locations. Some clues were easier to find, some led the players outside and some clues were entrusted to certain colleagues. The overall idea was to push the players beyond the walls of the office and explore the areas that they may not have been before. I of course then hid about 200 small eggs around the office to be found as well. 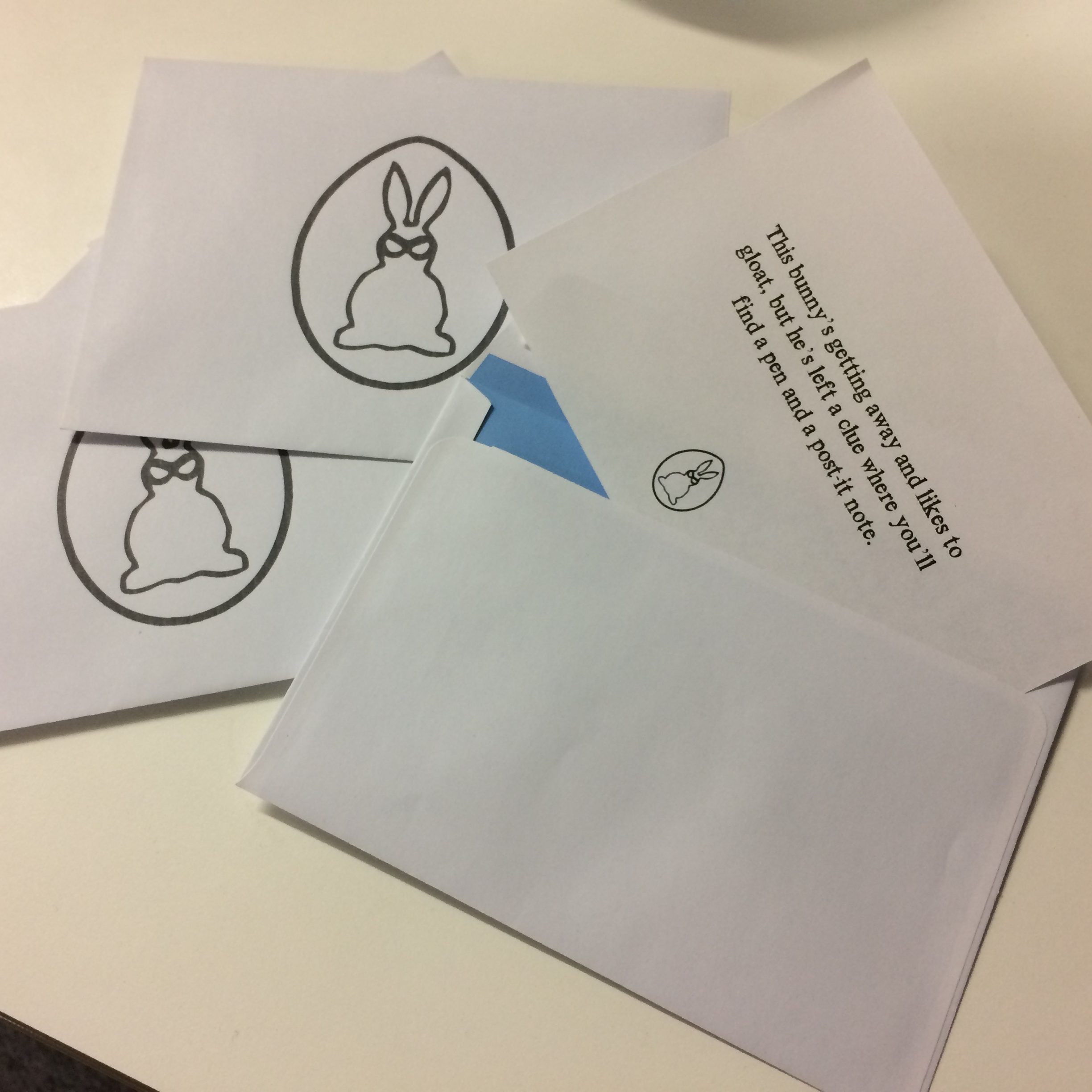 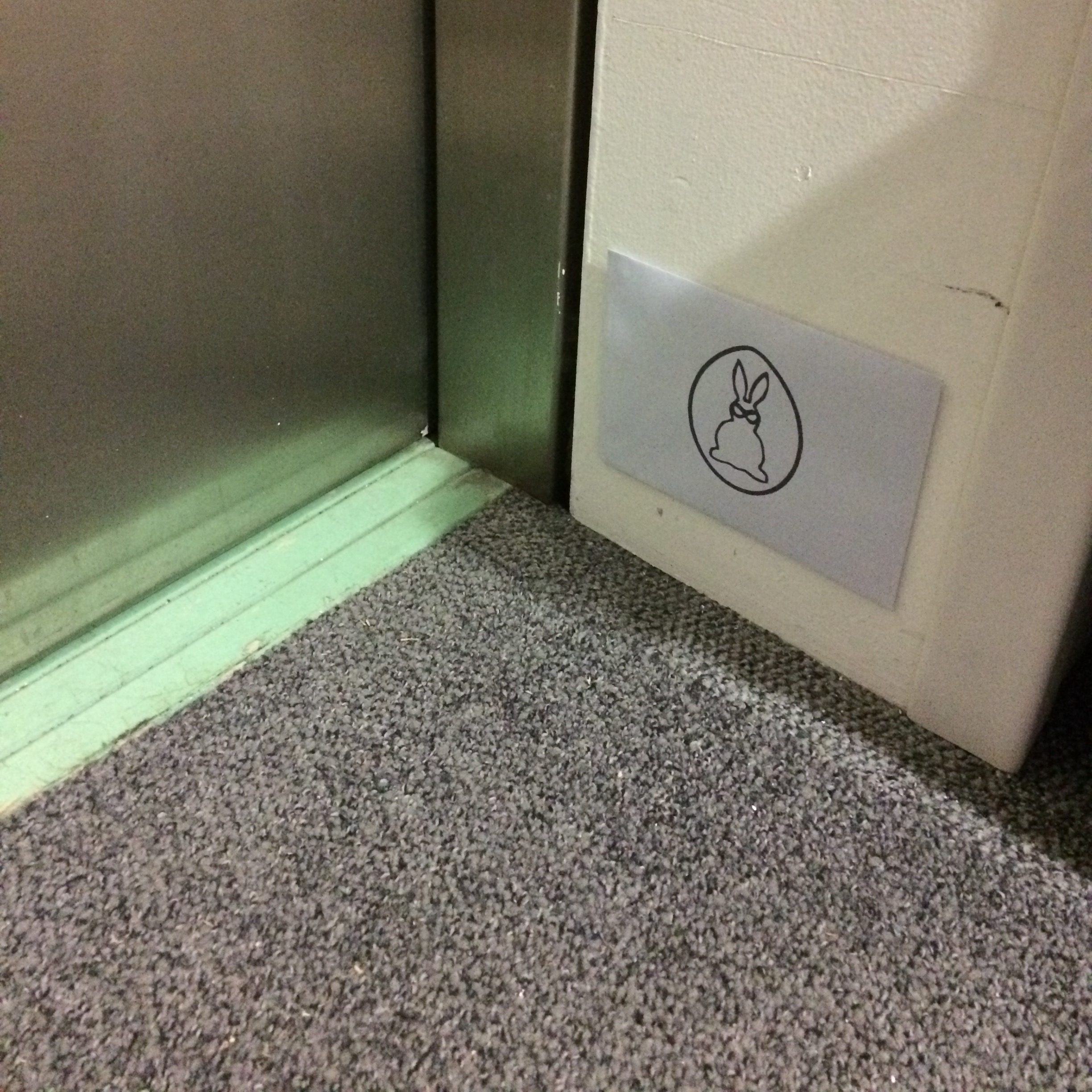 On the day of the hunt, I released the final video and offered a reward for each bunny found and a reward for the most number of eggs found. To my surprise, I found my colleagues literally running around the office trying to solve the riddles and find eggs along the way. I walked around enjoying the havoc I had caused; the excitement, the joy. But all good things must come to an end and after 2 weeks of planning for an excessive Easter egg hunt with an elaborate marketing campaign it was over in just over 40 minutes. I had underestimated my colleagues and their ability to solve riddles and find clues. But the important thing is they all had a fun morning and that is at least an improvement on what would otherwise be another grey and boring day in the office. I thank all of those who played and well done to those who won. It was certainly fun for me to see how easy it is to make your colleagues work so hard for the prize of a £5 Easter egg from Tesco. 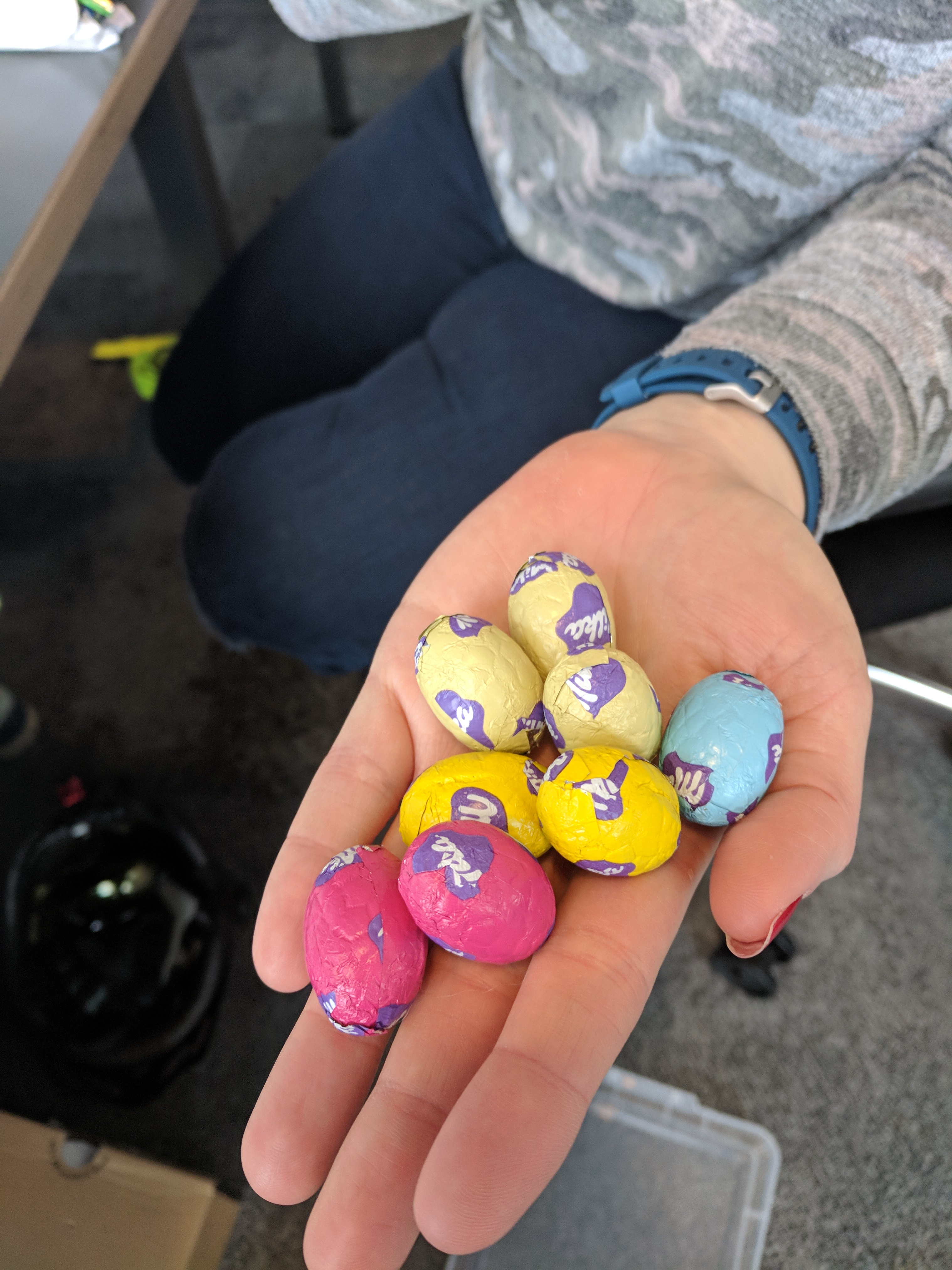 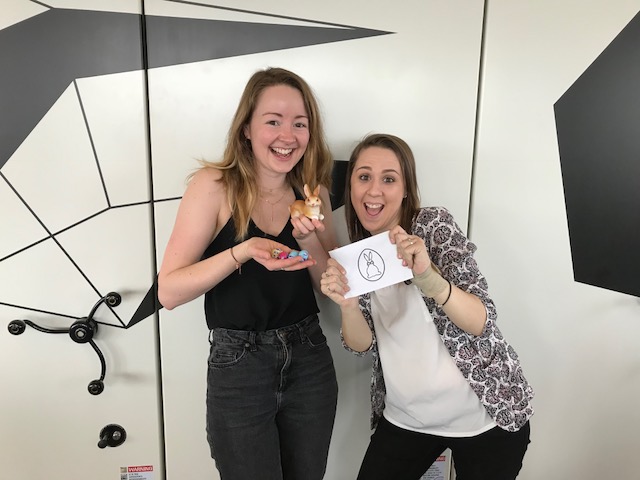 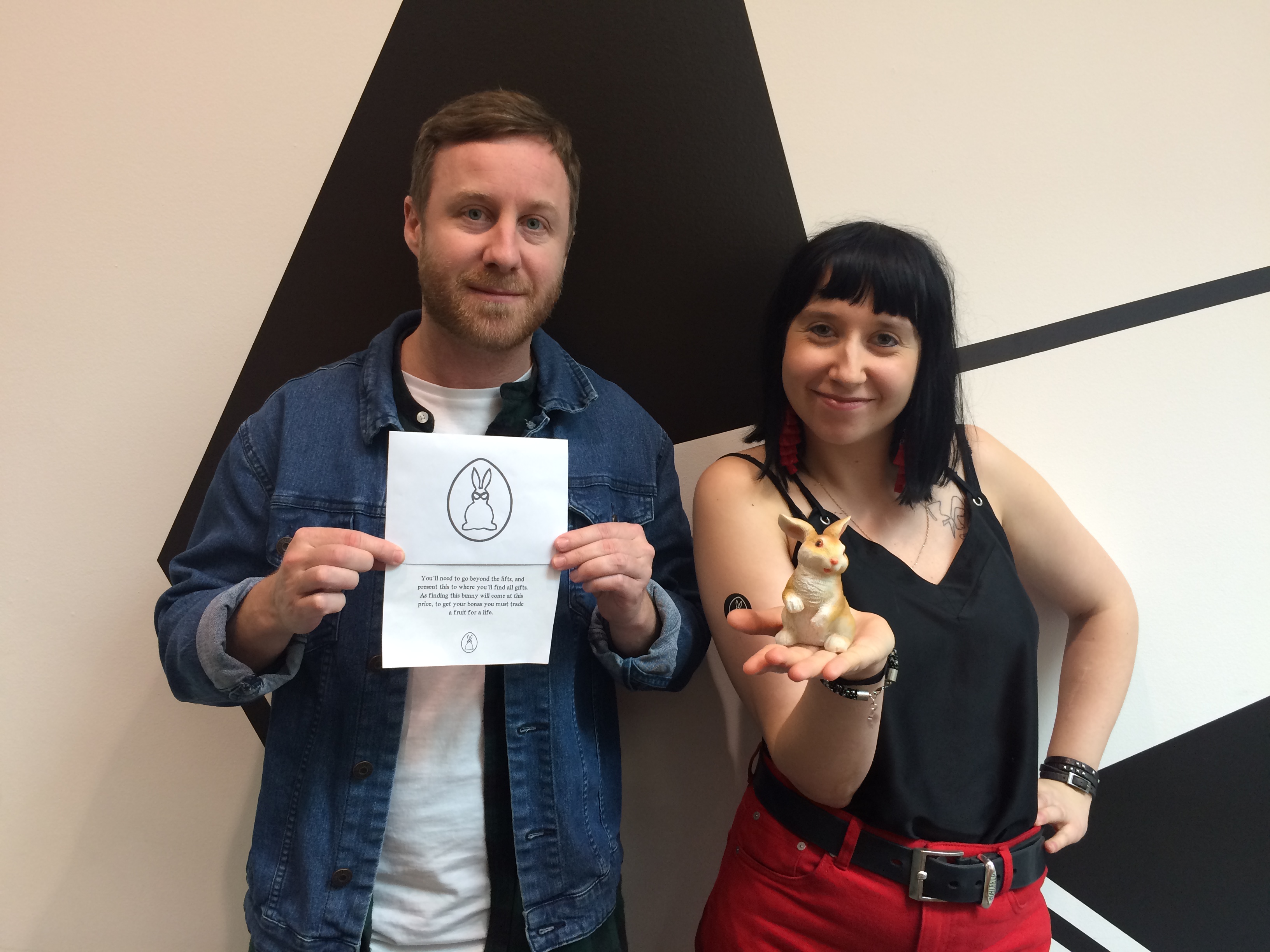 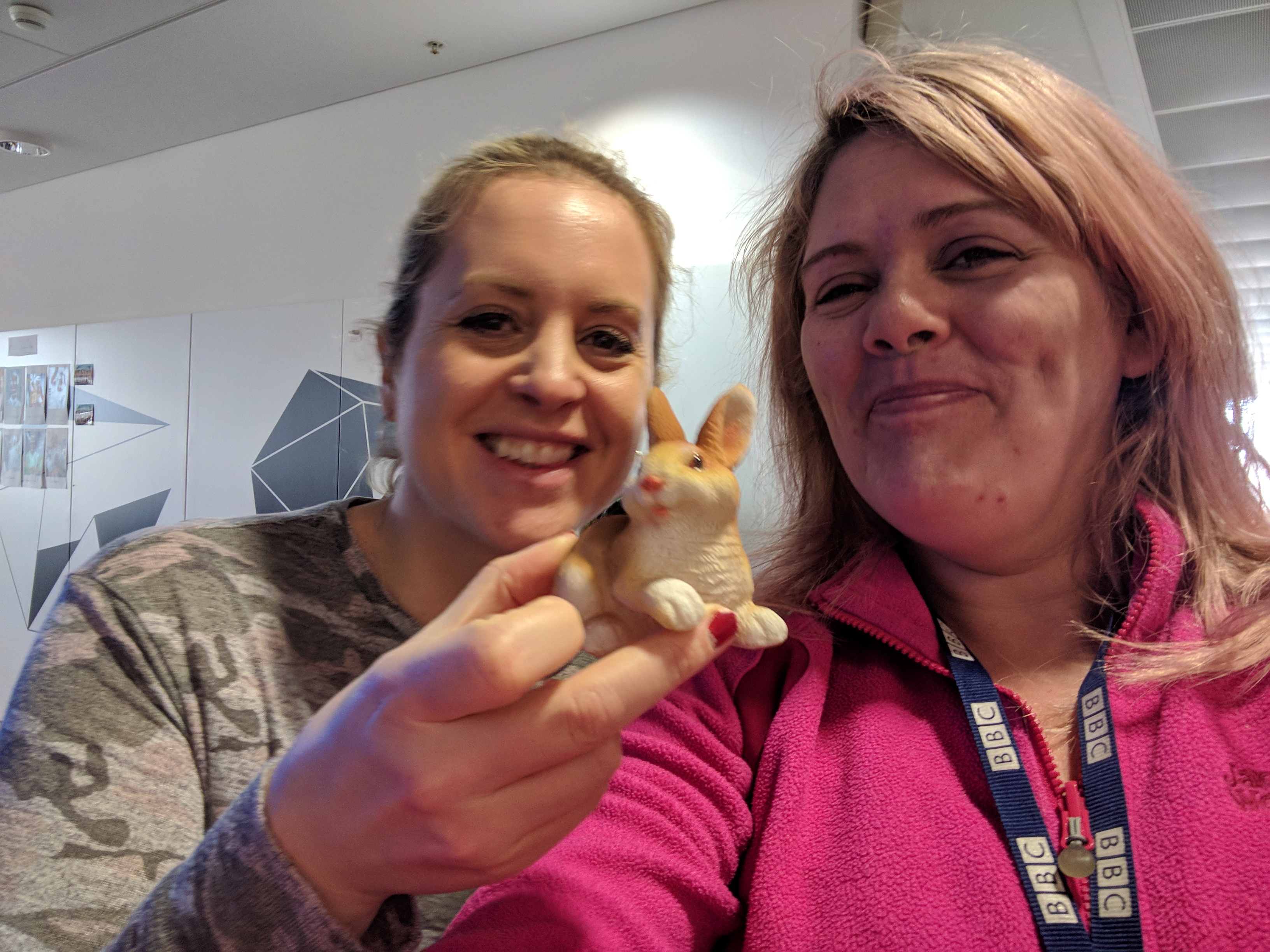 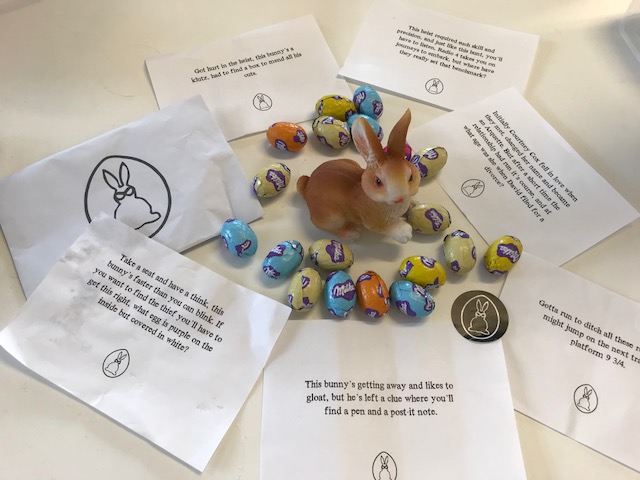 View all posts by phandrew38

This site uses Akismet to reduce spam. Learn how your comment data is processed.